In addition to the DHA, you've designed and run a number of accelerators around the world. Can you tell us a bit about them?

I have always considered myself to be exceptionally lucky to have traveled the world, often on someone else's dime, to ostensibly do work. So far, I have done projects In North America, Asia, Europe and Australia. I tried to start a project in South Africa and Brazil to round out my continents, but it was not to be. My international accelerator projects have really fallen into two buckets.

The first bucket is the foreign governments that want me to help them build an environment to import innovations in healthcare into their own systems, but more often than not, to help them export their companies into the lucrative US healthcare market. My favorite projects, like one I am working on in the Mediterranean right now, are bi-directional, as they both learn how to plug technology into their healthcare culture, as well as how to educate their companies to compete in ours. Cultural expectations are probably one of the hardest things to manage in these international projects.

In the other bucket, are companies that are looking to invest in early stage innovations, but really do not have the knowledge or ability to inexpensively sort through earlier stage deals that are worth hundreds of thousands of dollars, rather than the more established companies looking for hundreds of millions of investment dollars, that they might normally be used to evaluating. Some of the smarter companies have realized that they need to invest earlier into projects to be able to benefit from that specific innovation, but they don't know how to find them, evaluate them, or invest in them well.

That is what I help them figure out. In return, I learn a ton about innovation similarities and differences globally, which I then apply to each iteration of my accelerators to keep them cutting edge and relevant. My hope is that every new project, and I think I am up to 28 now, is stronger than the last.

What brought you to the Science Center?

One of the first successful accelerators I helped build was with the Canadian consulate, called the Canadian Tech Accelerator (CTA). I went to school (proudly) in Canada at McGill University in Montreal, and that was enough for me to be welcomed into that project many years back. At the time, I had the good fortune to work with a brilliant guy named Vince Finn, and we figured out a way to crowd source opinions in such a way as to improve outcomes in each iteration of the CTA that we worked on together. The Science Center took notice, and with a push from Vince, the DHA was born. I've been here 6 years now, though I have been kept on as a consultant, since the Science Center recognized that letting me continue my international projects would only strengthen new accelerators I’m involved with.

What are some of the challenges you face as DHA Director?

The DHA has been a powerhouse in both the local community and as a competitive entity nationally. I sometimes can get frustrated because what seems obviously to me (and yes, I begrudgingly admit that this doesn't mean it is easy for everyone else to understand) can take some explaining to others, to convince them of that value.

Steve Zarilli has done a lot to show that he gets that value, wants to continue that mission and he has had some great ideas on how to advance both the sustainability of these projects and benefit the local healthcare and tech ecosystems. It has been a great partnership and I look forward to it extending for as long as the Science Center will give me a home to build like the mad scientist I hope to become.

Another challenge is having the skill to read trends and incorporate them into the accelerator designs at the perfect moment. Add cutting edge thinking too early (like the blind application process we use to even the playing field for all applicants) and people push back, not understanding the value or the point of the innovation. Add it too late, and you can be accused of being stale and a copycat accelerator.

I often get push-back on my designs when I do new builds, and it can take a lot of discussion before my client can be convinced of the value of some of the new ideas I might introduce. I would say that this happens in about 90% of my builds and is one of my greatest hurdles.

What are you most proud of in terms of the DHA?

One of the innovations that was introduced into the DHA that I wish other accelerators payed more attention to, is that we focus on helping companies pivot from making a product, into selling a product or service that an end user would actually spend money for, which is not as obvious a pivot as one might think it should be. As such, we capture a key metric, revenue generated, that other accelerators either cannot, or will not capture.

I have always felt like using the investments taken by a company as a way to measure their success, as a bit of a red herring. You can take an investment and still never get to market, but revenue is a key indicator of market traction and interest. Revenue is like teaching a company to fish, once they know how to make money, they can limp along and grow organically, rather than worry so much about failing from a lack of investment. I suspect that this is one of the key reasons that so many of the DHA companies are still alive and well today.

The DHA deploys a double blind application process, which will also be integrated into the Launch Lane accelerator. What does that mean and how has it impacted outcomes of the DHA?

It has always seemed obvious to me that innovation and the drive to create is not limited to one neighborhood or coast. So if accelerators were not capturing innovators from everywhere, then the process must be flawed, not the innovators.

My father taught intercultural communication at Howard University for 35+ years, and he focused on how cultural differences influenced how information was received and disseminated. It was through discussions with him and then others from around the globe, that I began to see the need to find a process that focused on ideas, rather than the teams. The DHA removes names, institutions and gender pronouns from our early selection rounds to try and remove reviewer bias and focus on great innovations.

The result has been pretty amazing.

What we find is that if we start with a 55% woman and/or minority founder ratio before we evaluate the companies, we will end up with almost the exact same percentage of finalists in our cohort after three rounds of review and discussion, and this is without ANY further interference from us to keep the same ratios in the final cohort.

This is not what we see nationally, and I think that can be fixed if anyone wants to adjust their process a bit. I know that I plan to keep this methodology in every future build I work on moving forward.

Not everyone knows about your background. Can you share a bit about it?

I am the first-generation immigrant child of an Indian mother and a Polish father. Even though I was born in the US, my formative years were spent in every forgotten place on the planet that my father could get to while he looked for how news traveled to remote desserts and mountaintops before there was the internet and satellite phones.

My father speaks Hindi and has adopted Indian culture to the degree that he pushed for my science education alongside my mother, even though I was one credit shy of an English minor but hid it from my parents out of shame. This meant that I grew up in a household that looked white on the surface but was monumentally shaped by all of the highly educated blacks and Indians and everyone else that drifted through our doors from all over the world.

I think that this, along with an international education and advanced degrees in psychology and neuroscience from Temple, helped inform my vision for inclusion and how to build an even playing field to attract everyone, not just a certain subset of innovation.

When you're not building accelerator programs, what can we find you doing?

Lets see. I am always good for a magic trick with a deck of cards. I like building and riding mountain bikes. I am a mean rock band drummer, stemming from my days of playing with a band. I am a dedicated father of 1 daughter, and I have been with my wife for 30 years. I am a huge nerd for romantic comedies, especially from the 80's and 90's, and my impersonation of Vizzini from the Princess Bride may be better than Wallace Shawn's. I am quick with a joke, and most Thursdays, I can be found hanging out over a beer at Venture Cafe at the Science Center talking about my first love, startups, and all the challenges they face with anyone who will engage with me. 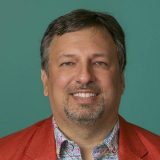 Cracking the Code to US Market Traction

Who Fuels the Science Center?