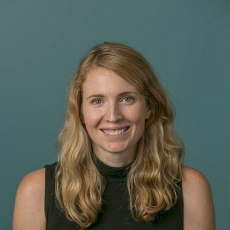 Kristen joined the University City Science Center in 2005 and has been involved with the launch and execution of several key initiatives and campaigns core to the 60-year-old institution’s strategy. As Senior Director of Marketing, Kristen is responsible for designing and executing a comprehensive marketing and communications strategy supporting the Science Center's strategic plan in alignment with the organization's enterprise initiatives.

In 2020 Kristen initiated and led a brand and positioning overhaul designed to unify all programmatic activity under the Science Center master brand in alignment with a new strategic plan. That exercise resulted in a new website, collateral, talking points, and onboarding for existing and new staff and board members.

Kristen was a key player in the launch of Quorum including oversight of the first major fundraising campaign in the Science Center's history, raising $1M toward the initiative. She was later involved with the launch of Venture Café Philadelphia which, together with Quorum, have collectively convened over 100,000 entrepreneurs, investors and business leaders. Kristen oversaw the re-brand and launch of FirstHand, the Science Center’s nationally recognized STEM education program for middle and high school students. She was also involved with the launch of the Science Center’s collaborative workspace, ic@3401 in partnership with Drexel University and the Launch Lane Accelerator for tech-enabled startups.

Previously, Kristen was responsible for the University City Keystone Innovation Zone (UC KIZ), an initiative of the Commonwealth of Pennsylvania providing tax credits and support to startups in the life sciences and tech sectors. Under her leadership the UC KIZ grew in geography, industry focus, and impact on the entrepreneurial ecosystem with $14 million in tax credits leveraged by over 100 Philadelphia startups.

Kristen has a bachelor's degree from Penn State University and a Marketing Certificate from the Executive Education Program at The Wharton School. She received the 2019 Rad Award for Connector of the Year and was recognized as a 2019 Technical.ly RealLIST Connector. Kristen serves on the Board of Directors of Amplify Philly and The Resource Exchange.

When Kristen isn't working, you can find her listening to too many podcasts, exploring the region's outdoor public spaces, longing for the day the Buffalo Bills return to the Super Bowl (while simultaneously rooting for the Eagles), and traveling as much as possible.