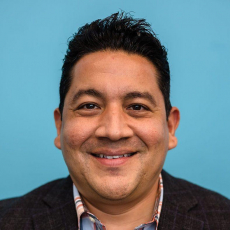 Eli joined the Science Center in 2021 as Capital Advisor. Eli is also Co-Founder & Managing Partner of International Innovation Associates, a boutique strategy advisory firm that enables organizations to develop and deploy bespoke innovation initiatives. He is also Co-Founder & Managing Partner for the Investors of Color Network, a national network of Black and Latinx accredited investors focused on closing the racial funding gap in early-stage capital.

Eli currently serves on the Board of the Angel Capital Association; Capital Advisor to the Stanford Latino Business Action Network; and Impact Cabinet for the Hispanics in Philanthropy Power Up Fund. He is an LP in a series of venture funds and founding Board Advisor to AccelHub Venture Partners and the Business Angel Minority Association (baMa).

Before that he served as Associate Vice Chancellor at Texas Tech University, where he also served as Executive Director of the Greater West Texas Regional Center of Innovation and Commercialization (RCIC), and co-founder and Executive Director of the Lubbock Angel Network. In this role, he raised three innovation funds totaling $2M focused on funding acceleration, university startups, and industry-university partnerships. He is an NSF I-Corps Nationally Certified Instructor with deep expertise in commercialization, angel & venture capital, and innovation strategy. His efforts in Texas led to over $20M in funding for startups, entrepreneurship programs, and proof of concept funds.

Prior to that Mr. Velasquez was co-founder and Executive Director of Innovate El Paso. Through his tenure, he helped six organizations access $9.5M from the state of Texas Emerging Technology Fund. He also managed the Camino Real Angel group conducting deal screening, due diligence and portfolio management. He went on to co-found El Paso’s first technology business incubator, recruited El Paso’s first full-fledged patent firm, and launched one of only three applied entrepreneurship programs for women in Texas.

Upon returning to his hometown of El Paso, TX, he was co-founder and Technical Director for the Bi-National Sustainability Laboratory, an organization that promoted the commercialization of technology-based projects on the U.S.-Mexico border. He was responsible for developing commercialization and incubation programs, along with intellectual property awareness and protection strategies.

He obtained a B.S. in Mechanical Engineering from Boston University and a J.D. degree with an Intellectual Property Law Certificate from Whittier Law School.