From the first time I stepped foot on the Science Center’s campus in 1977, I truly believed in its mission. The management team welcomed me, a young black adult who lived in West Philadelphia, and invested in me. In return, I’ve dedicated my life to help carry and promote the Science Center’s mission to the best of my ability!

Do you have any fun facts about any of the buildings on our campus?

I have several, actually! 3401 Market at one point had not only a bomb shelter in the sub-basement, but also a NASA centrifuge on the third floor. 3508 Market, the first building ever constructed by the Science Center was designed with no horizontal windows overlooking Market Street. And 3615 and 3665 Market, the first two buildings constructed on the north side of Market Street, were also the first two buildings to be demolished by Science Center, in order to make way for the construction of 3675 Market.

Tell us about your career trajectory at the Science Center. What was your role when you started, and others along the way?

I started out with the Science Center as a Jr. Maintenance Mechanic and Groundskeeper in 1980. After completing a few HVAC courses (learning from the Philadelphia Wireless Tech Institute to Honeywell, and several others) I was promoted to HVAC Maintenance Engineer. I was happy to earn the opportunity to receive additional promotions in 1990 to Maintenance Supervisor and in 1995 to Operations Manager.

But I really had the opportunity to help build and expand the Science Center when after some internal reorganization, I became Assistant Director of Construction in 1998. I was able to work on projects including University Tech Park (the Science Center’s partnership with Widener University in Chester), 3701 Market (with Townsend Capital at the time, now in partnership with Wexford Science & Technology) and Delaware Tech Park (with the University of Delaware). All of that experience, and years of successful development and construction projects have led me to my current role as of 2014, as Director of Construction.

How many buildings have you been located in?

Do you have a favorite building?

3700 Market is my favorite building because it was the first one assigned to me as a maintenance mechanic and I was 100% responsible for it in that sense, so it’s always been special.

Are there any turning points for the Science Center and/or the campus that come to mind?

In hindsight, 2002 was really a turning point for the Science Center as an organization. With Curt Hess (currently our Interim CEO and Senior Vice President of Real Estate), we refocused our real estate department, which was a much-needed and positive change at that time.

My favorite thing about working at the Science Center is helping the small companies we work with design their space to grow their business, especially labs. I’ve enjoyed the opportunity to work with startup companies on the layout and design of their space. I always tell them, “that’s why the Science Center is here. All you need to do is focus on running your company and we will work with you to deliver the business space that will meet or exceed your company’s needs.” It’s totally gratifying to do a walk-through with the occupants and watch the expressions of excitement on their faces when the space is all complete and ready!

Another favorite memory is when we finally constructed 3615 Market in 1995, on the north side on Market Street. For years, our management wanted to develop this land (World Forum was initially planning to use it for an international science conference center) but the project was challenged so many times with roadblocks like obtaining financing to conflicting community interests.

Another project I was fond of was The Market Street Revitalization Project because it exposed me to local and city-wide leaders and promoted the fact that the Science Center is a good neighbor to the community. I particularly enjoyed meeting and working with the people along the seven blocks from 34th Street to 41st Street. During this project, the city experienced the roughest winter on record, with a couple of back-to-back storms dumping over 78 inches of snow on the ground! This was while the sidewalks had already been demolished along seven blocks on the south side of Market Street. The Science Center somehow still managed to keep all business accessible during and after the snowstorms, working with property owners, building trust with them and ensuring that their sidewalks were constructed as soon as possible.

What I learned from that experience is that in most cases the city and community are generally working towards the same goals. Sometimes there are conflicting personalities and priorities that may pose challenges to achieving those goals in a timely manner, but just sitting and talking with these groups I learned they have the same objective.

What is your super-power?

They are technically two, but I would say enduring patience and understanding.

I would also like to add that from the first time I stepped foot on the Science Center’s campus in 1977, I truly believed in its mission. The management team welcomed me, a young black adult who lived in West Philadelphia, and invested in me. In return, I’ve dedicated my life to help carry and promote the Science Center’s mission the best of my ability! 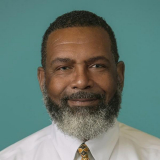